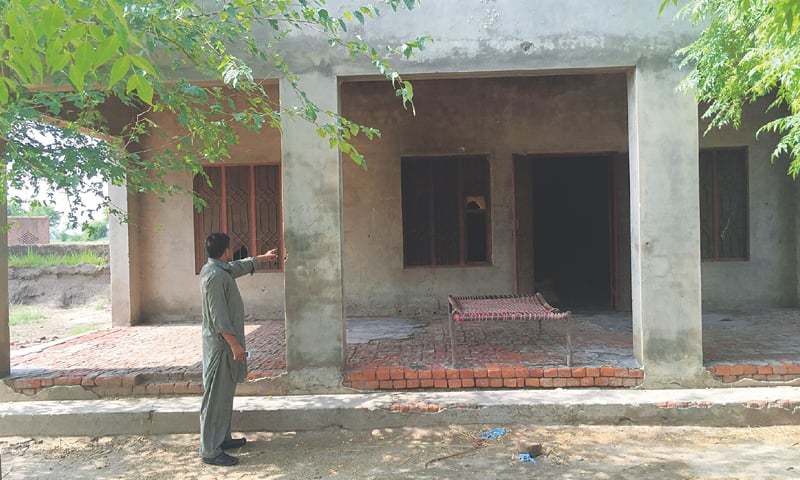 A CHAK 28/2R resident, Ghulam Murtaza, points towards the place where the ‘shootout’ took place – Photo by writer

OKARA: In the midst of lush green fields in Chak 28/2R — one of the several villages that make up Okara’s Kulyana Military Estate — sits a decrepit cemented structure, the outhouse where the Okara police claim the six terrorists they had killed during a ‘shootout’ in the early hours of July 13 were hiding.

Many villagers speaking to Dawn recall how they were woken up by speeding police trucks and jeeps late in the night. None dared to step out, and only learnt about the “raid and gunfight” the next morning, after the bodies of the suspects had already been removed.

“It was in the dead of the night when we heard police vehicles racing in the direction of the outhouse,” says Dilshad Ali, a village resident.

The outhouse belongs to a retired army major, Faqir Hussain, who, like other military officers, was allotted land in the Kulyana Estate around 20 years ago. But it has been in possession of two Anjuman Muzaraeen Punjab (AMP) leaders — Saleem Jhakkar, who has been in jail for the last year and a half, and his brother Naeem.

It was in 2009 when the retired major’s men allegedly shot dead three protesting tenants over a land rent dispute, after which Faqir Hussain has never been able to return to the village. “The tenants, led by Saleem, grabbed all my land eight years ago. I tried every available option but neither the military nor the provincial government helped me regain possession of the land I made cultivable after almost 10 years of hard work. The police are on the side of the tenants, and the courts haven’t helped either,” he says.

According to police claims, Naeem had given shelter to the suspects at the outhouse. “He fled the place after the raid and is now a fugitive,” says a senior Okara police official. Some say the government has announced a reward of up to Rs1 million for information that may lead to his arrest.

AMP activist Ghulam Murtaza says no one has any knowledge of the whereabouts of the families of the AMP leaders. “Only the police can tell whether they are hiding or are in their custody,” he says.

There are more than 50 policemen lounging in the AMP leader’s home; their officer-in-charge seems unhappy to see a newspaper team asking his men about the whereabouts of the family of the owner. “We were brought here the morning after the encounter with terrorists and don’t know anything,” he says. “Talk to our seniors if you want any details; we cannot help you.”

Murtaza, like other villagers, rules out even the “remotest possibility of the presence of suspects at the outhouse before the police arrived,” insisting that neither any AMP leader nor the tenants have anything to do with religious militants.

“It is a lame effort to start a witch-hunt against Naeem and the rest of the AMP leadership [in Okara] to break the back of our movement for land rights, and evict us from the land we have been tilling for more than four generations. We are not terrorists. Nor are our leaders, as the police would want the world to believe,” he says.

There is hardly any evidence at the outhouse to corroborate the police’s claim that a fierce gunfight between security forces and suspected terrorists took place there less than a week ago. There are a few large bloodstains on the ground of the verandah, and on the bedcloth inside the room; no bullet marks can be seen on the outer walls. The room has been stripped down and appears to have been out of use for quite some time.

A news agency report has quoted the management of Lal Masjid that two of the six suspects killed in the encounter were employees of Jamia Hafsa and had been in custody of security forces for several months. This development has lent further credence to the villagers’ claim that the shootout was no more than a case of “custody killings”.

Police, however, say intelligence was provided by the Inter-Services Intelligence (ISI). “The raid was carried out jointly by the counter-terrorism department, local police, and ISI officials,” says a senior police official, unwilling to be identified.

A leader of the Awami Workers’ Party (AWP), Farooq Tariq, who has been working with tenants of the Okara military farms for their land rights since the movement began 15 years ago, also says the incident was “staged” and is an attempt by the military farm administration, with the aid of the police, to force tenants to strike a deal with the Kulyana Estate allottees on their conditions.

A few days after the Kulyana Estate village ‘operation’, police and military personnel raided the house of Mehr Abdul Sattar in Chak 4/4L. Sattar has been in jail since April when he tried to organise a peasant convention. “Police had not found anything in Sattar’s home when they raided it to arrest him. But after the so-called Kulyana shootout, they claim to have recovered weapons and Indian currency. Doesn’t their story baffle you?” says the AWP leader.

“If the authorities think they can scare tenants by labelling their leaders as Indian agents, or framing them in false cases by using high-handed tactics, they are grossly mistaken.”