Seed patenting is one of the scourge of neoliberal agriculture, which began in the 1990s. It has been outraging peasants and farmers ever since due to its catastrophic political, socioeconomic impacts. This article is going to explore, analyze and critique hybrid wheat seed that is being introduced in Pakistan under China-Pakistan Economic Corridor (CPEC) agreement signed between the respective countries.

In 2014, the Beijing Engineering Research Center for Hybrid Wheat (BERCHW) gave a selected assortment of hybrid wheat to Pakistan, suitable for plantation in different part of the nation. The target was boosting crop production and to achieve food sufficiency.

BERCHW, besides extending specialized and scientific help to Pakistan, has additionally given free of cost hybrid wheat seeds adding up to 12,000 kg. Chinese agriculture researchers have also visited Pakistan to provide technical support.Hybrid wheat is aimed to be commercially produced over vast areas of Pakistan within two years. According to news sources, the Pakistani Embassy in Beijing is facilitating the research process between the two counterparts.Around 150 specialists have dedicated themselves to the research and development of hybrid wheat.

According to news agencies in Pakistan, the work on Hybrid wheat has been ongoing since 2012 where the China’s Hybrid Wheat Company and the Beijing Hybrid Wheat Engineering Technology Research Center have collaborated with Pakistan’s Guard Agricultural Company and Peshawar Agricultural University to demonstrate experiments on the cooperation of the second-generation hybrid wheat in Pakistan.Over 120 hybrids were planted in more than 230 experimental spots.

This agreement can also be verified from Sinochem’s press release of August 28 in 2012, which provides information on a cooperation agreement between Sinoseeds Hybrid Wheat Seed* (Beijing) Co., Ltd. (Sinoseeds Hybrid Wheat) and Guard Agricultural Research Services (Pvt.) Ltd. (Guard Agri). The press release highlights the agreement for the promotion and application of China’s two-line hybrid wheat in Pakistan.

According to Sinochem, Hybrid Wheat Company was formed with the joint investment of China Seed and Beijing Academy of Agriculture and Forestry Sciences (BAAFS) in 2011 to promote the industrialization of hybrid wheat technology and boost the selective breeding and popularization of fine hybrid wheat varieties.

An August 2018 report from an online Chinese news website Global Times shows that the Chinese are planning to cultivate their hybrid wheat along the Belt and Road route after successful trials in Pakistan.

Song Weibo, vice president of Sinochem Group Agriculture Division, China’s largest agricultural inputs company and integrated modern agricultural services operator, informed the Global Times that the company’s hybrid wheat has been harvested on a large scale in Pakistan, and has also gotten some exposure in Bangladesh and Uzbekistan.
According to the report, the company will continue to promote hybrid wheat in other Belt and Road countries and establish demonstration bases in Europe and North America.

It is clear that Sinochem is interested in opening a market for its hybrid wheat seed in Pakistan, as they have sent a number of experts to the country to work with local farmers. According to Song, around 150 experts have been sent to over 20 cities in Pakistan.

According to a report in China Daily the trial on hybrid wheat in Pakistan has been concluded and termed successful. The trials included tests on the hybrid varieties being carried out in 230 sites; spread over 2,000 hectares of experimental bases or local farm lands. This information was provided by the general manager Chen Zhaobao of CNSGC Hybrid Wheat Seed (Beijing) Co, a subsidiary of China National Seed Group Co under Sinochem Group Co that is responsible for the hybrid wheat promotion project in Pakistan.

Muhammad Arif, professor of agriculture at Peshawar Agricultural University whose involvement in the project can also be verified with a simple look on the project log page of his ResearchGate profile, has seemingly expressed his approval for the commercial introduction of Chinese hybrid wheat seeds in Pakistan

A glimpse at the hybrid wheat seed varieties that China wants to introduce in Pakistan and the Belt-Road initiative: 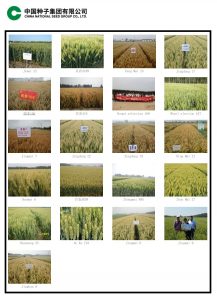 Further information about the project can be seen from a report by China Radio International on their website; (Please note that this information has been translated using Google translator).

According to China Radio International, the 2017- 2018 field trials were run by Peshawar Agricultural University. It seems part of the trials were carried out in a village Ruijji near Peshawar, Khyber Pakhtunkhwa.

The various institutions that seem to be involved in the research included Ministry of Science and Technology of China, the Ministry of Agriculture, Beijing Municipality, the National Natural Science Foundation of China, and the Pakistan Foundation Committee, the Beijing Academy of Agriculture and Forestry Sciences/Beijing Hybrid Wheat Engineering Technology Research Center and the Sinochem Group’s subsidiary Sinoseeds Co., Ltd..

In 2018, China-Pakistan Hybrid Wheat Joint R&D Center was also built in Peshawar under China–Pakistan Economic Corridor (CPEC) for the promotion of Beijing hybrid wheat in Pakistan.

It is quite unfortunate that Pakistani officials have highlighted certain features of Pakistan’s agriculture and farmers that could be construed as overlooking the hardships of the people, and essentially exploitative. For instance, it has been mentioned that,“Pakistani farmers can endure hardships, withstand high temperatures, and further that cheap labor and human resources provide an obvious advantage for Sinochem to run its hybrid wheat project in Pakistan.” Pakistan’s special geographical importance was also highlighted, keeping its trade closeness with Central Asia, Europe, Russia, China, and Africa in mind. Pakistan’s‘trade-friendly policies’ were also mentioned with emphasis laid on the possibility that China could produce and export from Pakistan to EU and the United States.

As Pakistan is a member of WTO, it has to act in accordance to all the rules and agreements that are part of WTO charter strictly with no questions asked. And as a result of this connection with the international trade governing body, an amendment was made in Pakistani Seed Act of 1976 in 2015.

Its key points are:

As it can be noted, this amendment was made with the protection of intellectual property in mind, to satisfy TRIPS the Intellectual Property Rights (IPR) agreement made under WTO that was made to facilitate private sector to gain control of natural resources worldwide through imposing intellectual property rights laws on them. There is no doubt that the Amended Seed Act has taken away farmers rights and given domination to corporations. It needs to be stated that this law has been met with severe opposition and resistance from the farming organization nationwide.

Now with China’s unopposed entry in the Pakistani agricultural market, combined with this new Seed Act of 2015, standard free market policies being accepted by the Pakistani government under advanced capitalist states, as well as the CPEC influence, no doubt the Chinese are being given an easy free entry into Pakistani agriculture, which will have enormous repercussions for the small farmers, as well as the country’s sovereignty.

And with this newfound freedom what is the first thing that Chinese do? They go after our staple food crop that is wheat. The perplexing thing is that all these changes made in wheat are slowly turning it into an unhealthy food crop. Putting the health aspect aside, the socioeconomic aspect of it is damning itself. Now the Chinese will have full control of the wheat that is consumed in and exported out of Pakistan. These new Chinese hybridized varieties will come accompanied with Sinochem’s fertilizers and pesticides, putting more economic pressure on local peasants and farmers and also unnecessarily increasing Pakistani wheat production value.

The way things are going; with Pakistanis allowing foreign corporate companies and foreign organizations to pry into its own agricultural practices and taking over its natural food sources, the history is repeating itself. The people of this region have already experienced the taste of what western colonialism is like. Now the time has come that the Pakistani people prepare themselves for a new form of colonization, i.e. Chinese neocolonialism!!

No doubt we face a behemoth of a typhoon!