The Food and Agricultural Organization (FAO) of the United Nation holds 16th October as “World Hunger Day” every year for the past 70 years. The United Nations slogan for World Hunger Day is “Climate is changing. Food and Agriculture Must Too.” However, Pakistan Kissan Mazdoor Tehreek (PKMT) and Roots for Equity in collaboration with Asian Peasant Coalition (APC) and Pesticide Action Network (PAN AP) has marked the day as “World Huger Day”; A public rally participated by the large number of small and landless farmers was in Haripur, Khyber Pakhtunkhwa (KPK) protested the abysmal condition of food security faced by a majority in the country, especially the women across the working class and small producers.

Speaking to the rally the PKMT provincial coordinator Tariq Mehmood stated that Pakistan is one of the largest producers of wheat, rice and milk. Despite this fact, the advent of free marketing, corporate farming and land grabbing in the name of agricultural progress has deeply aggravated hunger and has further impoverished the marginalized sectors, especially women. It is shameful that Pakistan is 147th out of 188 countries on the Human Development Index, 121st in 155 countries on the Gender Inequality Index, and the Multidimensional Poverty Index (MPI) shows that 45.6% of Pakistani are multi-dimensionally poor. The aggressive corporate agriculture policies implemented in the country coupled with lack of equitable distribution of land are responsible for the relentless poverty in the country. 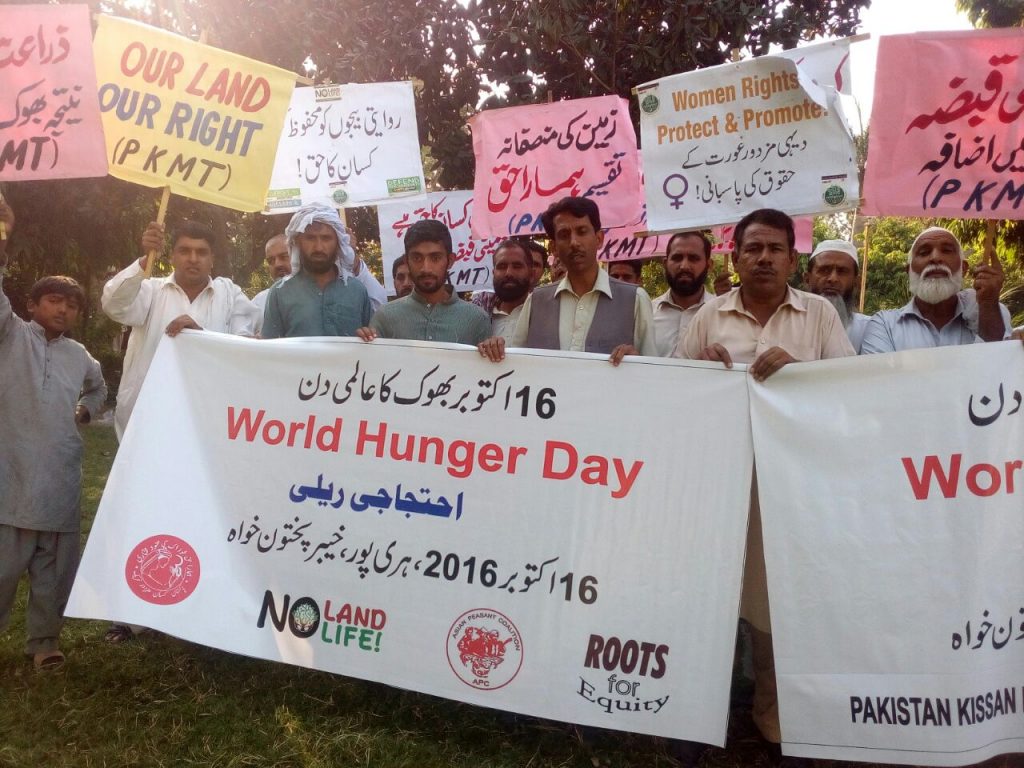 District coordinator PKMT Fayaz Ahmad was scathing of the UN’s slogan “Climate is changing. Food and Agriculture Must Too.” It is the disastrous fossil fuel economy that has created chaos in Hattar, as well the climate catastrophe world over. Now these corporations are providing ‘climate smart’ technologies, which will earn them more profits and the landless, small famers more hunger and misery.

Several leaders of PKMT from KPK stated that poverty and hunger can only be corrected if farmers are allowed to be the key decision makers for agriculture and rural development policies. The Government has initiated programs such as China Pakistan Economic Corridor (CPEC) that have adverse impacts on farmers, especially along the CPEC route including in Haripur and Hazara; this will surely increase poverty and hunger in KPK and the rest of Pakistan.

PKMT demand’s an equitable distribution of land with the elimination of the role of international corporations from rural and agriculture development. Only self-sufficiency in agriculture production can ensure food sovereignty for the country. In addition, agricultural laborers, especially rural women be recognized as a formal sector a must of decent wages. 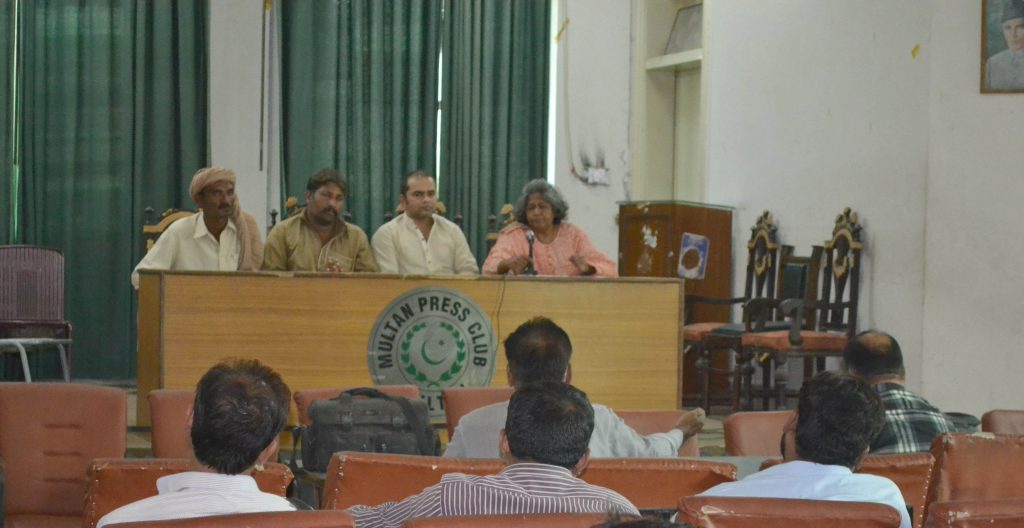 PKMT and Roots for Equity also hold a press conference in Multan Press Club on the eve of World Hunger Day on 16th October, 2016. According to Dr. Azra Talat Sayeed, Executive Director, Roots for Equity, an almost criminal impact of unjustlabor practicesin agricultural sector is the impact on agricultural work force, especially women who comprise a huge percentage of the agriculture labor force. They form the bulk of labor force in sowing, harvestingof important crops such as cotton, wheat, sugarcane and rice, including vegetables. According to Mr M. Sadiq, a landless farmer from the riverine belt, “our misery is based on inequitable distribution of land and lack of decent wages for agricultural workers.” According to an ongoing research of Roots for Equity, in Sindh and Punjab women cotton pickers earn Rs 200 to 300/maund of cotton; sugarcane harvesting earns them nothing but measly amounts of fodder. Wheat harvested in extreme weather conditions earns them no more then 5-8 kg of wheat per day (Rs 150-250/day).Agriculture women workers, working 8-10 hours/day, face acute gender discrimination and human and women rights violations. It needs to be emphasized that the role of these women in agricultural production is responsible for vast amount of foreign exchange earnings.